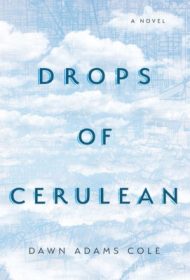 Dawn Adams Cole’s family saga Drops of Cerulean spans several decades to tell the story of a Houston mother and her son.

The novel begins in 2014, as Cadmus Doyle, a retired professor, reluctantly moves into an assisted living community after the death of his husband, Robert. The narrative then shifts to 1930, introducing Cadmus’ mother, Ilona Petrarkis.

Ilona dreams of attending teachers’ college, but her Greek-American family expects her to join their burgeoning restaurant business. She soon catches the attention of wealthy businessman Patrick Doyle. The two marry, and Ilona finds her new life luxurious, but far from perfect. Eventually, tensions in her marriage come to a devastating head, and she is left to raise Cadmus and his sister alone.

Facing others’ intolerance of Cadmus’ sexual orientation, Ilona makes a decision regarding the family business that causes an unhealable rift between mother and son.

Although Cadmus goes on to lead a satisfying life, he regrets not having a chance to reconcile with his mother. Decades later, a woman named Delphina discovers an unlikely connection to the Doyle family and offers Cadmus an opportunity to make peace with his past.

Drops of Cerulean has much to recommend it. Fans of the genre will relish Ilona’s fairytale social ascent, the attendant heartbreak and the inner strength that helps her endure. Cole takes readers deep into Ilona’s emotional and intellectual life, giving them a stake in her progress. Cadmus’ inner world, however, never becomes as palpable as Ilona’s. While Ilona’s active and passionate personality takes center stage, Cadmus never quite comes into his own as a character. Instead, he’s defined by his relationships with Ilona and Robert. Additionally, Delphina’s story seems to unfold abruptly compared to the deliberate pacing of the previous narrative.

Although it would mean cutting decades from the story, focusing exclusively on Ilona would tighten and strengthen the novel. Even as is, however, committed readers of family sagas will enjoy Drops of Cerulean.