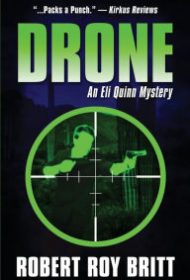 Drone is a classic noir private detective novel in many ways. Its clipped, no-nonsense dialogue, fast-paced prose and tough-guy characters recall classics such as The Maltese Falcon or The Long Goodbye.

Several differences make author Robert Roy Britt’s take on the genre fresh and interesting, though. First, instead of dark, shadowy settings in the urban nightlife of big cities, his private eye, Eli Quinn, plies his trade in the searing sunlight of small-town Arizona. Second, the requisite female supporting character, reporter Samantha Marcos, provides a surprisingly wonderful foil for Quinn’s cynicism. And third, Quinn has an unexpected trusty sidekick, the failed police dog Solo. Quinn’s backstory—after his wife died, he quit his job as a reporter and became a detective at his friend Sam’s urging—is covered in a previous novel.

Drone is a quick read, not just because it’s short but because it’s compelling. Quinn and Sam attend a speech by a politician whose podium is blown to bits by a mysterious drone. Quinn, Sam and their volunteer sheriff “posse” friend notice that the police were set unusually far back from the podium, and some of the lawmen seem too calm after the assassination attempt.

The story, informed by Britt’s own experiences as a journalist, involves some issues that mark the 2016 election cycle: guns, immigration, racism. Britt’s writing moves briskly with prose that Dashiell Hammett or Raymond Chandler might have applauded. On the very first page is a gem: “Samantha Marcos blew in, bright and fresh, like a promise.” The narrative is weighted more toward dialogue than navel-gazing scene-setting, and it captures the oppressive heart and contrasting beauty of the Southwest vividly without bogging down the plotline.

If there’s one quibble, it’s that the novel is over too quickly, as if written as a TV series’ episode. But that’s a quibble. This book and its predecessor serve as an introduction to what hopefully will be many more Eli Quinn novels to come.