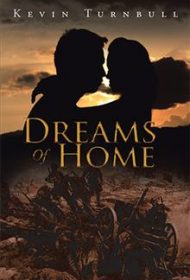 This rousing World War I adventure stars a pair of dashing Aussie mates who survive the carnage at Gallipoli and are then deployed by British Intelligence to foil a German plot involving poison gas and a secret POW camp housing thousands of Allied prisoners.

In Bill Parker (the book’s narrator) and Jack Reynolds, Australian author Kevin Turnbull provides a brace of movie-ready heroes. At once rebellious young “larrikins” and intrepid patriots, they are adept with deadly weapons but have appealing vulnerabilities. Wounded and lonely, Jack muses: “What I wouldn’t give for a hot bath and a cold beer.” Bill sustains himself through all perils with reveries of his great love Kate, who seems to be communicating with him through the vapors.

From Bulgaria (site of the prison camp) to Africa, our heroes fight the dastardly Germans, random crocodiles and a psychopathic American mercenary called Linden. They are aided by a vivid collection of comrades: the plucky Scotsman McTavish, the brave partisan Christina (code name: “Butterfly”) and a colonel called Charlie Forsythe, among others. We know who will prevail in the end.

Turnbull’s prose is muscular and energetic (“The stunned German could not answer, so Linden kicked him again. He slumped back again and lay groaning in his own mucus and blood”), with some lapses into sentimentality (“the light of love emanating from her eyes”).

The novel’s dramatic momentum might hold up better at, say, 350 pages, rather than these 530, but Turnbull is an adept writer with an admirable gift for both propulsive action and contemplative emotion—a terrific combination in any war story. And if film producers have their antennae up, they may sense some potential box office gold in this compelling, if somewhat formulaic, battlefield buddy tale.