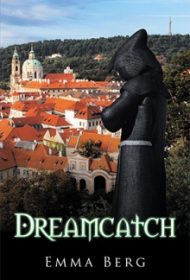 This imaginative high fantasy presents an alternate world where nightmares are eaten by powerful shadows residing inside specialized healers called dream catchers. Just as sin eaters ingest the sins of another, dream catchers relieve the suffering of patients by eating the nightmares of the sick, injured, and fearful.

According to the rules of this world, no human may touch a catcher. Human contact causes catchers physical pain and makes humans susceptible to developing shadows and becoming catchers themselves, a possibility that’s both respected and reviled.

One day, a young man named Joseph touches the hood of Madeleine, a shrouded little catcher, which causes him to slowly change into a catcher also. He journeys for months to find Madeleine again so that he can understand the transformation. After his newly formed shadow kills someone, Joseph wakes up in Underside (an underground civilization where catchers and other outcasts, including Madeleine, live away from the dangers of Topside, the above-ground world).

As Madeleine’s health deteriorates from hosting her extraordinarily strong shadow, Joseph  trains as her replacement. They travel to Topside on a dangerous dream-catching expedition. Along the way, Joseph learns about Madeleine’s mysterious past and how she became one of the most successful catchers of all-time.

Occasional rambling segments could be tightened or eliminated, and a few inconsistencies (references to Madeleine as both a “girl” and a “woman”) cause needless confusion. Some grammatical and typographical errors appear in the book’s first half, although the last 200 pages are nearly error free.

These are minor issues in a narrative that offers elaborate world-building, including detailed descriptions of unique people and places and exceptional character development, such as Madeleine’s rustling voice and word economy (“We come as we come”). The novel presents an interesting, well-conceived story with careful plotting, skillful pacing, and attention to detail.

This is a fresh and intriguing entry into the crowded fantasy genre. Happily, this book leaves the door open for a welcome sequel.