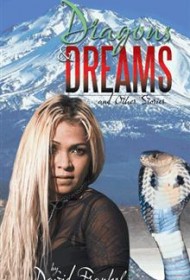 The author of this collection of three short stories takes myths and folk tales as his inspiration, and this influence is particularly evident in not only the magical elements but in the story-within-a-story structure of each tale. In “Dragons and Dreams,” a fishing expedition becomes a dragon encounter; “Tales from the Safid Kuh” follows the strange adventures of Holly, a “slow” young man who experiments with going out on his own; and “Desire” finds its protagonists battling a bigot both above and below ground while trying to understand the true identity of an ascetic stranger.

While there are imaginative elements in each of these tales, the plots are extremely difficult to follow, and the writing is cumbersome and confusing. The characters are often contradictory; for example, Holly, who is identified as suffering from “blighted intelligence,” still manages to engage in intellectual debates and has a sophisticated vocabulary. The erotic encounters that occur in each story seem arbitrary, as do many of the actions and motives because of this lack of character development. A charming Ukrainian naval officer suddenly becomes a dangerous bigot, and it isn’t clear if this is because of a magical intervention or simply a plot device. A shopkeeper performs sex acts on Holly, yet this elicits no real response from him, and given his limited experience, this is a surprising lack. Two fishing buddies discover a strange island inhabited by a dragon and a mysterious woman, but the story then abandons them so there isn’t a sense of resolution.

The links among the events and the characters may be completely clear to the author, but unfortunately they have not been made comprehensible to the reader.