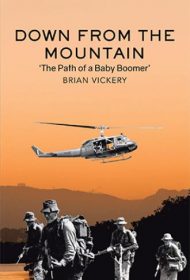 Brian Vickery’s Down from the Mountain: The Path of a Baby Boomer, is the autobiography of a talented career soldier who served his native Australia.

Raised in Murwillumbah, New South Wales, Vickery was the son of a WWII veteran, raised “without privilege.” As a student, he writes that he should be “classed as a borderline failure”; he was disruptive and disinclined to learn.

In 1965, he was drafted into National Service. Interviewed for officer training, the self-described “intellectual midget” told so many lies he could barely keep track of them all, but he was accepted and did well. The military suited him, and for his career’s sake, he volunteered to serve as a platoon commander in Vietnam.

While married and beginning a family, he trained hard for combat duties. He served one eventful tour that he describes colorfully; his platoon not only fought Viet Cong but at various points fended off aggressive rats, a wild boar, and “mosquitoes the size of attack aircraft.” “Vietnam provided an enormous array of adventures,” he writes, “and some were quite horrific.”

Later, his military career took him to locations such as Brunei, Darwin and Hong Kong. Finally, he retired and tried his hand at running a small business.

The author’s detailed memory and storytelling ability make this narrative interesting. For instance, he writes of receiving a telegram about the birth of his daughter in the middle of a planned ambush of the enemy. As his patrol makes its way through a growth of bamboo, “I had an uneasy feeling that we were being watched. I slowly turned and looked over my right shoulder, and just one clump of bamboo away was this magnificent tiger.” Chapters are short and well-paced, and they get quickly to the more interesting military training and combat tour.

With clear, honest writing and a mixture of mild self-deprecation and pride, Vickery shows the arc of “a tough life but not an unhappy one.”