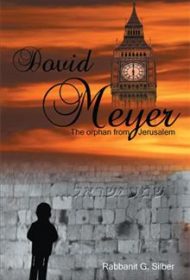 In this novel of Jewish religious awakening, Dovid Meyer, a 13-year-old Israeli, teaches a Jewish family the importance of spiritual wealth over material gain.

In 1973, Dovid’s father is killed in the Yom Kippur war in Israel. Dovid feels responsible for his pregnant mother Elisheva and his sisters, and applies for a well-paid au pair job in England where he can work and continue his religious studies. He is hired sight unseen by Sarah and Charles Kalman, non-religious Jews.

Soon the Kalman children are enthusiastically embracing their Judaism to Sarah’s delight. When Sarah becomes seriously ill, Charles too turns to Dovid for guidance. As he and Sarah find comfort from their renewed faith, they decide to move the family to Israel where Charles can immerse himself in study. But it’s Sarah who will exact a promise from Dovid’s mother to ensure the future of both families.

Dovid is an interesting character, and the narrative offers some colorful secondary characters, as well, such as the Kalmans’ Jewish Hungarian cook. However, the story is often interrupted by the author’s didactic prose. In one passage, for example, the narrator notes that Dovid has come to realize that “in whatever state it has pleased G-d to place a man, only one thing really matters and that is the choice he makes for good or evil, to follow G-d’s commandments or to deny them, and that the only thing which can make man truly happy is to make the right choice.” Such frequent moralizing pulls readers out of the story and grows tiresome over time.

Still, the book has many rewards, particularly for those having a crisis of Jewish faith. The author brings much religious food for thought to the kosher table, as seen in the Kalmans’ personal journey. Before meeting Dovid, the Kalmans were accustomed to picking and choosing directives from their religion to suit their lifestyle. In the end, they—and readers—learn that those choices weren’t nearly nourishing enough.