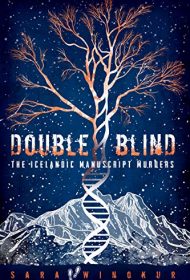 Sara Winokur employs her geneticist experience in this gripping novel featuring Brynja Pálsdóttir, genetic criminologist for a company that works with the police in Reykjavik, Iceland.

The story begins when 7-year-old Lúkas disappears while at a carnival with his twin sister, Brynja. It then jumps to 2017. Still haunted by her brother’s disappearance 20 years ago, Brynja is working with police to solve crimes with cutting-edge DNA research. When she receives a letter with a mysterious poem hinting that Lukas is alive and referring to an historic Icelandic manuscript about to be displayed for the country’s independence celebration, a chain of events is launched.

Brynja’s fiancé is the country’s prime minister. With his help, she’s permitted to inspect the manuscript for possible clues hidden in the text. Shockingly, though, the messenger who brings the manuscript to her office collapses after eating some pastries that have been delivered there and later dies of poisoning in the hospital. As similar deaths ensue, Brynja becomes a prime suspect.

Winokur writes in a clean, snappy style replete with intriguing information on Icelandic history and lore, forensic DNA evidence and more. Readers will find wonderful descriptive passages, such as this one regarding the independence celebration: “Reykjavik’s church bells could be heard throughout the city and beyond, the sound of joy and pride in Iceland’s independence… No one was immune to the spirit of triumph and delight tapped by the pealing bells. In the kitchen, Brynja lowered her coffee cup for a moment as she listened and enjoyed. She felt a lightness in her chest.”

Because of the book’s Nordic setting, it’s enticing to compare this fine, galloping murder mystery to the late Swedish author Stieg Larsson’s Girl with the Dragon Tattoo trilogy, but that would be a disservice to Winokur’s compelling debut. Brynja is a complete character on her own, not a shadow reference to some other storyline.

Whether Winokur writes more books featuring Brynja, there’s one similarity with Larsson’s books: This would make a terrific movie.