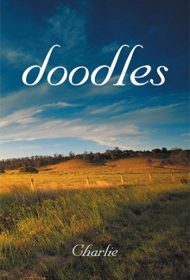 doodles is a poetry collection that comments on the current zeitgeist, including the global pandemic, mass unemployment, and the dangers of climate change. The speaker also includes details from his own life, including reflections on family, love, and mortality.

The collection by Charlie includes 50 free-verse lyric and narrative poems. Typical of the timely material is “An idea,” which concludes with these lines: “along with the universal minimum wage/ health care, education and pensions/ should be the machines based on them/ with enough royalty on them/ to cover the costs/ of their making, maintenance, and distribution.” As this title aptly conveys, the author’s poems tend to be more idea- than image-centered, more invested in telling than showing. The result is work that reads more as lectures composed by a concerned and knowledgeable citizen than as occasions for deep sensory and emotional engagement.

The poet-speaker relies on expository language rather than concrete details to reckon with the world around him. For example, he writes: “Bad as it is/ COVID with 338,000 deaths so far/ […] is NINE times less dangerous to the kids/ than dirty water.”; “If we spend 43% of the time in our cars/ in the city/ stationary, quietly waiting/ while we poison our planet with our fumes…”; “A change is happening/ and it needs to soon/ if we are to keep our planet fit to live on.”

Even when addressing more personal aspects of his life, Charlie summarizes information rather than crafting scenes for readers to see and feel along with him: “Watching as happy grandchildren emerge/ playing the final note/-hopefully on time/ in many more USO concerts/ and seeking more ways/ just to be kind.”

In its current form, this collection reads more like a series of blog posts or short essays than a compendium of poems. As such, it does not yet reflect the attention to image-making and other literary techniques that distinguish successful mainstream poetry collections.