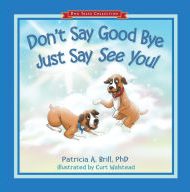 As with Do Bad Dogs Get Cancer?, the first in Brill’s Dog Tales Collection, the author focuses on the relationship between two dogs, Turbo and Boxster. Boxster is dying, and because this book is viewed as an extended conversation between the two dogs, rather than something seen from the owner’s point of view, their dialogue resembles the kind of exchanges one might imagine between two people: “It’s okay to be sad. It’s even okay to be mad. But I want you to realize that when I die I will finally be out of pain. My cancer will be gone; I won’t limp anymore…and I will be able to play with all the other dogs in heaven.”

The book strikes a delicate balance between the sadness of Turbo’s losing Boxster — tears are shed and fears expressed — and Boxster’s uplifting request that Turbo continue with a happy life.

The book’s title refers to Boxster’s belief that he and Turbo will see each other again in Heaven, “along with our angels and all the other humans and dogs we knew who died before us.” These religious aspects may not be every reader’s cup of tea, but they’re tastefully handled, and despite the title, the book stands on its own without them.

The illustrations capture the characters’ emotions perfectly as Boxster accepts his fate and Turbo slowly considers the idea of life without him. The text contains a few minor proofreading issues, such as “to” instead of “too,” but as a whole, Don’t Say Goodbye Just Say See You! is an excellent guide to the process of bidding farewell—or “See You!”— to a loved one.