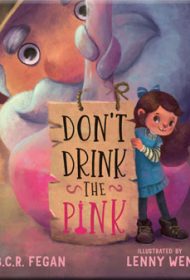 On her first birthday, Madeline is visited by her Grandpa Gilderberry, an eccentric inventor with an array of colorful potions. He tells her to pick one, warning her “Don’t drink the pink.” She selects a red one and drinks it, causing her to breathe fire. For the next 14 years, Madeline picks a new color every time—but always avoids the pink potion. Each time, she’s granted wondrous powers: to fly, become invisible, and more.

But on Madeline’s 15th birthday, her grandfather is absent, having passed away a month before. She finds the pink potion, with a note that says “Happy Birthday” and “Never fear.” Madeline drinks the potion, and is transported back in time to her one-year-old self, with her grandfather once again offering the potions and a comforting bear hug.

Intended for ages 3-8, the book showcases basic concepts, such as numbers and colors, but also tackles the weighty issues of aging and death. As Madeline gets taller between each birthday, her grandfather grows more frail, and although the pink potion brings Madeline back to age one to see her grandfather again at the book’s end, we can assume that it, like the effects of the other potions, will only last a day.

Written in rhyming verse with outstanding illustrations, the book’s main drawback is the unvarying repetition of its signature stanza, seen 15 times: “Happy Birthday, Madeline,”/ he said with a wink./ “Take a potion, take a brew./ Just don’t drink the pink.” Small alterations could preserve the meaning of these lines while making them more interesting to read. Additionally, Grandpa’s death may be difficult for the youngest readers to comprehend.

Nonetheless, Don’t Drink the Pink is an entertaining read and another excellent offering by Fegan, who has established himself as a consistent author of quality children’s books.