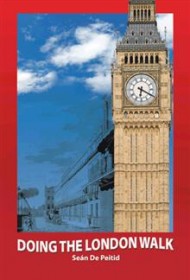 Every travel guide or narrative takes perspective from its author. Whether the book is a simple manual, such as a Baedeker, or a highly personal account, such as those by Patrick Fermor or Freya Stark, the work takes on aspects of the author’s knowledge and predilections like a canvas takes on colored wash.

De Petid’s Doing the London Walk is no exception. This book, which offers proposed walks around the city – including Fleet Street, Covent Garden and a stroll along the Thames — is strongly flavored by the author’s fondness for the 17th and 18th centuries. De Petid is a retired historian from the University College Cork, and it’s clear that his expertise centers on such luminaries as Samuel Pepys, James Boswell, Samuel Johnson, Christopher Wren, and Canaletto. His London walks take readers to the places where these men worked and lived, and his narrative describes the major events that influenced their lives. Of particular interest are the author’s knowledgeable descriptions of the Great Fire of London and the beheading of Charles I.

De Petid expertly captures the sights and sounds of a London where pedestrians had to dodge slop thrown from upper story windows, and where the fumes from coal fires shrouded the city in fog. His book sometimes slips into disproportionate excursions into the lives of Pepys, Boswell, and Johnson, however, and readers looking for comparable details on the Victorians or Edwardians will be disappointed. The book also suffers from copyediting errors — particularly the misuse of period placement with quotation marks, and improper capitalization — and the occasional use of the vernacular of De Petid’s favored centuries (addressing his audience as “gentle reader,” for example), which some may find bothersome.

De Petid’s scholarship is impressive, however, and his work is crammed with fascinating details. Despite the book’s flaws, many readers may find Doing the London Walk a valuable addition to their works on London and a friendly companion as they explore the city.