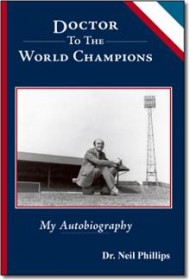 Dr. Neil Phillips’ autobiography is entertaining and descriptive from the start, taking readers from his early life to his eventual career in sports medicine.

Phillips grew up in the coal-mining town of Tredegar in South Wales. He dreamed of becoming a professional cricketer and spent every waking moment working toward that goal. After a severe blow to the head during a rugby game, the so-so student somehow developed a photographic memory, leading to high achievement at medical school. Phillips then wanted to become both a professional cricketer and a leading surgeon.

As Phillips’ medical career flourished, so did his sports involvement. He developed a thriving career as a sports medicine doctor beginning in 1963 when no training or name for such a role existed. The author eventually reached a key role as honorary team physician to the Senior England Football Team. In readying the team for the 1970 World Cup in Mexico, he was among the first to consider altitude acclimatization, proper hydration, unclean food and other health threats to an athlete’s performance.

Phillips’ autobiography is highly detailed and written with flair. He vividly recounts numerous sporting events with the liveliness of a highlight reel. The author shows sensitivity as well, such as when discussing his early career and the close attachment he made with one special 11-year-old boy dying of leukemia. Young Michael confided to Phillips that he planned to play for the Yorkshire cricket team when he grew up. Seeing the boy’s increasingly pale face, Phillips said, “I knew Michael would never play for Yorkshire. I knew Michael would never grow up. He could not go on forever being topped up with blood transfusions. Life was so unfair. Life was cruel.”

Phillips’ hefty autobiography will appeal to enthusiasts of cricket, rugby and those fascinated by the history and key players of England’s football teams in the ‘60s and ‘70s. It also offers educational nuggets for those interested in early sports medicine.