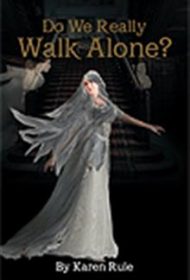 Surprisingly lighthearted as it explores an evil entity that refuses to die, Do We Really Walk Alone? is the first of three published works by the author that follow the supernatural experiences of a psychic young woman named Lela, who narrates the story.

Lela was born into a small-town family of psychics who can hear and see the spirits that walk among us. She and her roommate, Audrie, attempt to help the ghost of a murdered woman who now haunts their shared flat. During their encounters with the supernatural, Lela and Audrie also meet Catherine, Lela’s spirit guide who bridges the worlds between the living and dead. Lela’s most important new relationship, however, is with Charlie, a handsome man who appeared in her dreams and who also has some psychic ability. Together, this strange assortment of mortals and spirits work to destroy a murderous ghost that has terrorized the town for 100 years.

This book delivers a fun read filled with interesting elements, including a haunted library, glowing red eyes that appear out of nowhere, and an unpredictable cat with its own apparent awareness of the supernatural. Exploration of dark, fearful elements is balanced by playful accidents, such as Charlie’s difficulties sitting on a bean bag chair and the cat’s mischievous antics.

The story is engaging, but suffers from poor writing mechanics. Sentences are frequently paraphrased and repeated, and space is needlessly devoted to mundane, irrelevant tasks (e.g., trips to the bathroom and coffee breaks). Numerous errors in grammar, tense, spelling, point of view, and word usage also confuse and distract, such as: “Nothing wasn’t going to stop us from enjoying this place”; “World’s biggest heal”; “You can come here and amerce yourself in the past”; and “Are they aloud to tell you what’s going to happen to you?”

Despite an abundance of writing errors, the story remains compelling. Forgiving readers who enjoy paranormal tales may find this an intriguing launch to the author’s series.