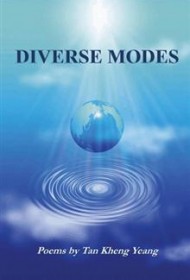 Diverse Modes is an apt title for this book of poems from Tan Kheng Yeang, as there is indeed a fascinating, not to say sometimes startling, diversity of method, subject and vocabulary on display in these pages.

Yeang’s active, nimble and restless curiosity is by turns analytical, philosophical, scientific and poetic as he takes under consideration topics ranging from the most abstract to the most concrete: from poems named for emotions such as “Shame,” “Malice,” and “Hate” to “Traffic Signs,” “The Culvert,” “Iron” and, well, “Concrete.”

Particularly effective is this writer’s talent for surprising word choice and metaphor. One man hears his “clothing’s shabby chime,” while another “sifts no pleasure from his work.” In “Anxiety,” the title emotion “ties a knot in his heart / And moans a dirge in his slow feet.” Especially felicitous is Yeang’s clever, light-hearted description of “Hydrogen”: “lightest of gases / lightest of elements / invisible elf / bare of colour taste smell / on tiptoe to burst into blue flame.” Elsewhere, he writes of a “silent turmoil of black ants,” or of lightning as “Dissevered terror roaming space.”

In this way, Yeang brings us up against ideas and things that we think we know, making them fresh and vibrant. Done well, as in the poem on “Hydrogen,” Yeang’s talent for pure description can astonish.

Not everything, though, is done this well. Often the sense of a poem gets lost in awkward and vague words and phrases: “He who is captive to his environment, / Deeming his paltry concerns / Grasp the sum of things…” And sometimes Yeang’s powers of imagery fall flat: “Diverse are the forces / Endeavoring to bake the dough of thought.”

Despite these quibbles, however, this a fine collection of poems that, with some editing and rewriting, could be made clearer, sharper and more engaging.