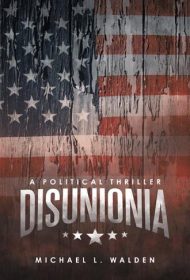 Disunionia opens in a futuristic United States, where the federal government still functions, but barely. The political system has fractured into many small parties; Washington gridlock is constant, and the congressional offices have fallen into disrepair.

When newly elected Senator Mark Williams arrives on Capitol Hill, he almost immediately finds himself in the middle of intrigue. One of his senior colleagues, Senator Bee Cooley, drops by to introduce herself and warn Mark about “Concon,” an emerging movement calling for a new constitutional convention. Concon’s foreign backers hope that a new constitution will make certain states secede, breaking up the nation for good. When Bee dies mysteriously, Mark finds himself threatened by pro-Concon forces.

Meanwhile, Theresa Vargas, just inaugurated as governor of Arizona, finds that Concon endangers both her career and her family. And newlyweds Carol and Tony uncover the surprising force behind the Concon lobby and race to reveal the truth.

Given the current divided political climate, Walden’s vision of the future is escapist enough to be entertaining yet pointed enough to feel relevant. The ultimate revelation of who has masterminded Concon and why is also wickedly clever.

The story’s execution, however, often falters. Although largely sympathetic, the characters often fall flat, a problem exacerbated by the fact that Walden sometimes “tells” rather than “shows” when revealing their personalities (e.g., “they shared a strong work ethic, continuous goal-setting, and stubbornness”). Although the plot is inspired in places, the number of characters and subplots crowd the novel’s relatively slim page count and impact the author’s ability to pace the story; as a result, some developments, such as the identity of Bee’s murderer, seem abrupt rather than carefully nurtured to fruition.

In Disunionia, Walden has the seed of an entertaining suspense novel. The book needs revisions to structure and style, however, before it is likely to appeal to its target audience.