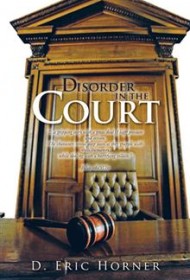 There are many iterations of courtroom drama in fiction. Consider To Kill a Mockingbird, Twelve Angry Men and A Time to Kill. Now, D. Eric Horner’s Disorder in the Court adds yet another take on the theme.

The story begins with a disparate mix of citizens waking up to their own degrees of self-loathing and unhappiness. A high flying lawyer and his wife are preparing to take their spoiled daughter to her court date. The judge who will be presiding, and whose daughter is his court reporter, will be meeting his ex-wife for lunch. College students plan on attending court for educational reasons, as does a young couple so that they can divorce. And there’s a decidedly malevolent escaped convict and his drug-addled partner who don’t have a spot on the docket, but are prepared to demand one.

Once the unknowing victims are assembled, the villains appear in an operatic frenzy of gruesome violence that makes anything out of ancient Greek drama seem like pre-school. The enraged convict seeks revenge on everybody, but especially the judge who refused to hear his appeal. Amidst the ensuing bloodshed, the stories of these unfortunate victims and psychopaths are intermingled. There is bravery, fear and heroism stoked to a conflagration of emotion.

The author is skilled at making readers feel trapped in the nightmare of the courtroom. We want to learn the outcome of the story just as quickly as the protagonists do. But the neighbors and fellow citizens Horner portrays are little more than two-dimensional characters. He obviously cares for them but would be advised to work on developing and ennobling those characters he invents. Horner has the talent; now he has to develop his skill. While this title doesn’t quite live up to its promise, readers would be wise to keep an eye out for Horner’s next book.