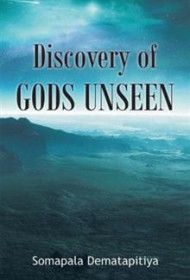 As a young man growing up in Sri Lanka, author Somapala Dematapitiya believed in the existence of the gods as shared by his grandfather, but categorized them as “unreasonable, unjust and unkind, and thought that the best treatment they deserved was to be left alone.” However, he changed his mind later in life when, to overcome his fears and physical suffering, he sought the help of the “Divine Screen” (Anduna) of God Dedimunda of Aluthnuwara. (He never explains the meaning of the title, which refers to one particular god.) Speaking through Kanthi, an uneducated divine medium, the author found relief and answers to many questions through discussions with this god and then felt compelled to share his knowledge by writing this book to verify the truth of the existence of gods.

Besides his personal experiences, including several communications with his dead mother, Dematapitiya shares information about the six divine planes where he posits that the gods live above the earth in astral form, as well as unique details about seven select gods and goddesses. He discusses their powers, as well as how the gods can act to help humans beset by evil spells. He also shares his noted god’s recipe of an herbal cure drawn from a roadside plant that treats ailments such as rheumatic pain. This god gave him a cure for AIDS as well, he writes, and he has been trying to get scientists to test and verify it.

A well-educated man, Dematapitiya fluidly translates this book from the original Sinhala language with only minor editing issues. The contents may seem surprising to the uninitiated, but the work is intriguing, regardless of one’s familiarity with the subject. Presented as divine truth, the book reads like a folk tale, yet the author offers compelling cases of specific individuals who were helped or hurt by the gods to make a case for the book’s credibility.