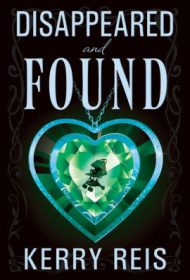 In Kerry Reis’s mystery Disappeared and Found, a young woman’s world is upturned when everything she believed to be true about her family is exposed as a lie, plunging her into the depths of a years-old mystery.

When Dorothy Samuels’s community college course requires her to test and identify her blood type, she’s puzzled by the results. Newly aware that her blood type is incompatible with the contributions of her biological parents, she confronts her “father.” He confirms that Dorothy was indeed adopted, and Dorothy begins to question who she really is.

Citing a closed adoption, her father denies any knowledge concerning her biological family. Unsure where to turn, a new friend guides her to a television show called Finding Family that reunites adopted children with their birth parents.

When the DNA results from the show return, Dorothy is matched to a brother who has independently sought the help of a different reality show to resolve the mysterious disappearance of his mother and infant sister 19 years earlier. Working together with police, the shows aim to answer the question: Was Dorothy adopted or was she kidnapped?

This is rich thematic territory, but with so many players in the investigation, many chapters are dedicated to catching characters up on events the audience already knows about. Too much attention is also paid to irrelevant character busy work; seating charts, lighting setups, even getting in and out of cars, are described in painstaking detail.

Meanwhile, any semblance of suspense is quickly and unceremoniously alleviated through the simple acts of asking direct questions and reexamining evidence that had been obtained years earlier. Main characters show little emotion, even when learning the grisly details of Dorothy’s biological mother’s fate. Dorothy absorbs every new twist with passive acceptance, almost cheerful optimism, and little introspection.

Disappeared and Found promises an interesting, unique mystery, but the narrative is quickly sidetracked by the minutiae of everyday life, leaving little for readers to invest in.