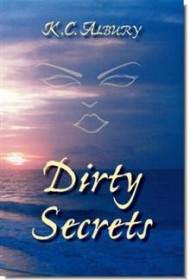 This romance novel takes place in the Bahamas in the 1970s and features an entirely black cast of characters and an intricate plot that weaves the lives of half a dozen major characters together in surprising ways.

Dirty Secrets tells the story of two families that are linked by one man. Lionel Pinder is a sexy, self-described “playah,” a man who beds only the hottest women he encounters in his job as a croupier in a casino on Nassau. But when one conquest, Patrice, tries to trap commitment-phobic Lionel into marriage, he escapes to the remote Bahamian island Eleuthera.

There, he meets Jesse, a young, naive woman unhappily married to a much older, abusive man. Jesse’s mother, Anne, had abandoned Jesse and mysteriously fled to Nassau with Jesse’s sister Jade when the girls were babies. Anne eventually becomes the mistress of Patrice’s father, Mike, who is a rich Nassau businessman Â¬– until she is ultimately betrayed by Jade in a storyline that runs parallel to Jesse’s.

This hormonal heat combines with a well-written and well-crafted story to make Dirty Secrets one of the best sexy romances you’re likely to find this summer.