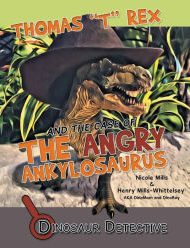 Nicole Mills and Henry Mills-Whittelsey (aka DinoMom and DinoBoy, according to the book’s cover) present an inventive and entertaining, but rather disjointed picture book in Thomas “T” Rex and the Case of the Angry Ankylosaurus.

Thomas—”T” to his friends—is a dinosaur detective who’s approached by Alistair, an Ankylosaurus, for help. Alistair’s favorite food, his ferns, have disappeared, and together he and Thomas follow several types of dinosaur tracks left at the scene of the crime. These lead to a group of dinosaurs, all awaiting Alistair’s arrival for a surprise party. As it turns out, the ferns were taken merely to lure Alistair to the party.

It’s a simple mystery, told in rhyming verse, with a brief interactive component that urges readers to scan a page of dinosaur tracks and match them with ones they see in the story.

Despite that inventive element, the book is hampered by several flaws. The rhyme meter is highly uneven, making reading aloud challenging. (Example: “Allistair gasped/ ‘You mean…no one stole/ my ferns in the end?’/ ‘Turns out, it was just your friends.’”) The text is also  overshadowed by the book’s large, color illustrations and captions. In most two-page spreads throughout the book, one page offers text, the other a full-page illustration with a caption. While the captions are amusing—”Ferns. It’s NOT what’s for breakfast,” notes one beneath a picture of Allistair—they distract from the main text and can appear to be part of the larger story, confusing readers.

On the plus side, the illustrations are striking, with depth, dimension and texture that young readers will appreciate, and despite all, children who like dinosaurs will find much to enjoy here. But some re-thinking of the book’s design and rhyme scheme would greatly enhance this  sometimes bumpy read.