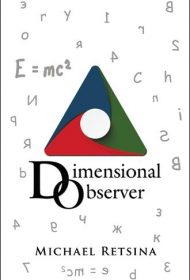 As the story progresses, Michael soon acquaints himself with doppelgangers from other worlds. His encounters include a series of voyeuristic interactions with a female version of himself named Susan who exists in an inverse, mirror-image of our own world.

Weirdly infatuated, Michael becomes convinced that he has seen Susan in his own world, believing that she has assumed the identity of a co-worker, as well as possibly several other women he has met in chance encounters. He attempts to uncover the truth, impeded along the way by the unexpected expiration of the mysterious computer program.

Dimensional Observer starts from provocative science-based speculation about infinite worlds, and it’s informed by thoughtful questions (e.g., would an interdimensional traveler grow sick from the alien challenges to their microbiome?). However, the tension derives from one source: which (if any) of the women that Michael suspects is actually Susan? And that mystery doesn’t endure scrutiny.

For example, how could Michael, who is so stricken (and disturbingly smitten) with Susan’s feminized similarity to himself, be fooled by simple disguises? Why can’t others discern if the variations are actually the same person? And why should Susan want to keep her alleged status as an inter-dimensional traveler a secret, since the technology already exists in the story to corroborate it? The only seeming reason is to maintain a plot that already strains credulity.

Add to that a host of other problems—Michael’s creepy, objectifying view of women, extraneous and redundant passages of dialogue, and a denouement robbed of any impact by the several chapters of explanation that follow it—and Dimensional Observer fails to give readers what it grants its protagonist: a world that engages our curiosity and attention.