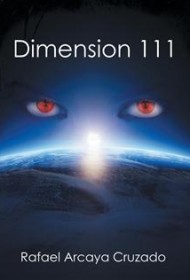 Dimension 111 is a thematically ambitious work of speculative fiction about an assistant manager of an ad agency in Puerto Rico who was allegedly abducted by aliens, has the ability to travel between dimensions, has become immortal, and could be an unwilling savior.

A braid of storylines set in 1988, the novel follows three main threads: one chronicling the life of Daniel Amaya, the Puerto Rican ad man who is evidently living multiple lives in various dimensions; another following the escalating Cold War tension between the United States and the Soviet Union regarding a looming nuclear Armageddon; and lastly the coming of Yahweh to Jerusalem to inform the people of Earth that “…the day of man is near, his days are numbered; his end is near.”

The nuclear apocalypse and the Judgment Day plotlines are both intriguing, but the Amaya thread—which should be the most powerful because it features the main character—becomes tedious as it frequently repeats content regarding his existence in various dimensions. The pacing in this thread is slow and the character development inadequate: Amaya never becomes more than a two-dimensional character.

Also, the rationale behind some of the plot points simply doesn’t make sense. For example, Amaya is considered a god because his “biomagnetic emissions are way above” that of normal humans. Readers are never given a larger context that would allow them to understand why this characteristic makes him a god.

The novel’s writing is adequate, and some of the concepts explored are interesting (the presence of advanced beings, the power of faith and free will, the existence of hell, etc.). The problem is in the lack of editing. This 584-page novel would have worked better at 350-400 pages. Tightening the storyline would have done wonders for the pacing and readability. As it stands, this is an unwieldy story that is likely to frustrate many readers.