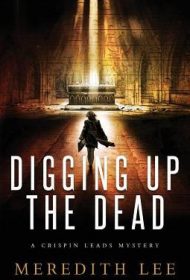 In the second installment of the Crispin Leads mystery series by Meredith Lee (pen name for Dixie Lee Evatt and Sue Meredith Cleveland), the intrepid NYU graduate student stumbles upon the truth behind a long-standing family secret concerning her mother’s death and the curse of King Tut’s tomb, which claims that those who disturb it are doomed to die.

Crispin, in Egypt pursing studies in ancient burial rites, is a magnet for trouble, which is evident by the novel’s first line: “There is something decidedly off-putting about waking up to the sight of a dog running into your tent with a human hand and forearm dangling out of his mouth.” This is just the beginning, as Crispin travels to London to continue her research among Egyptian archives at the British Library. There, a man has been found crushed to death under heavy boxes, and the files are in shambles.

There is little opportunity to catch one’s breath as Crispin ponders the coincidence of two bodies in two days and discovers among the jumbled files one suggesting much earlier access to Tut’s treasures than had previously been thought.

As she pursues this possibility and seeks a connection to the deaths, Crispin’s backstory is revealed through her memories. A young child when her mother, an Egyptologist, was killed in a plane crash, Crispin and her twin brother were raised by her father, an esteemed university professor. In Crispin’s eyes, she is never smart enough or successful enough to please him.

Lee creates credible characters, with enviable strengths and a fair share of foibles. She paints evocative London scenes that are gray and damp, the air almost as tangible as the gritty sand and heat of the Saharan desert.

The closer Crispin gets to proving her theory about Tut’s tomb and its curse, the more dangers she and those around her encounter. The fast-paced narrative will keep readers captivated as two mysteries, not just one, are ultimately resolved—but, happily, not as expected.