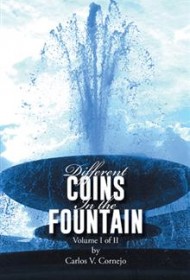 Carlos V. Cornejo’s latest book, Different Coins in the Fountain: Volume II of II, offers another diverse collection of short stories. With 54 pieces included in his first volume, Cornejo has added another 42 to this second volume, numbering the pages from 369 to 612 to underscore that this offering is an extension of the last.

With most stories ranging from four to five pages, each takes little time to read. In addition, readers have the opportunity to tackle the stories in any pattern they choose, as each story is written to stand alone.

The stories feature interesting titles, such as: “Mom, Just Don’t”; “The Trouble with the Plan”; “Squeeze”; and “Problems Thinking Outside the Box.” They touch on various genres, including fantasy and mystery, and many end with a simple and poignant — though often pedantic — message, such as: “What I didn’t know until it happened is that a person’s fantasy can change. Counting blessings is the real medicine for being happy with who I am.”

Cornejo’s characters and scenes are richly described and easily visualized. Unfortunately, the writing can be redundant “(It was frustrating that his thinking wasn’t always linear and sometimes digressed into questions that proved frustrating…”) and difficult to follow (“Garford read his books and paced the floor of his ranch house because he was over-whelmed [sic] by his own juxtaposition on some of his readings”). In addition, even though the stories don’t appear to be tied together, character names seem to be reused, creating some confusion.

However, because of the diversity of plots, readers will likely forgive the author for some of the book’s challenges. Those who can overlook the writing obstacles here will find generally entertaining and stimulating tales.