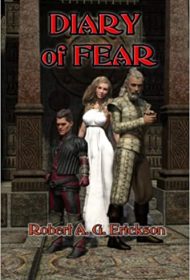 Robert A.G. Erickson, author of the Fluke Family and Wizor Fair series, brings his flair for old-school fantasy to this story that blends politics, romance and comedy.

Diary of Fear tracks the tension between two rulers vying to control a single kingdom. At the novel’s start, Lord Hamer Bleathune controls half the kingdom of Calpathon, while King Maldon Zefron controls the other half. The two regents have maintained a fragile truce, partly because of Lord Hamer’s reputation as a powerful sorcerer.

That tenuous peace begins to dissolve when a would-be royal from another race and realm arrives. Lord Kaman, a dwarf, flees to Calpathon after violence waylays his bid for the throne of his homeland. Lord Hamer welcomes Kaman, also known as Fear (“I commenced calling myself that when I realized that most folks were afraid of me,” he explains), and makes him his court historian/scribe.

Kaman’s complicated history follows him to his new home, as the conflict between Lord Hamer and King Maldon begins to boil over and various romantic entanglements ensue.

Erickson delights in tracking the drama between Calpathon’s royal families and members of their courts. Even as he sketches out political battles worthy of Shakespeare and fantastical realms worthy of Tolkien, the author details the everyday emotional ups and downs of kings, scribes and ladies-in-waiting.

The story revels in romance as much as it does sorcery and warfare, a dynamic that will feel familiar to readers of Erickson’s other fantasy series. As in the Fluke Family books, Erickson is skilled at maintaining this delicate balance. His flair for character development makes the book’s faraway settings feel immediate; the comedy he sketches out in awkward courting schemes is both charming and compelling.

The dynamic may prove somewhat tiresome for readers searching for straightforward fantasy that depends on action, magic and gore. But anyone who enjoys a human element in their fiction will find relatable drama and characters to love in this charming novel.