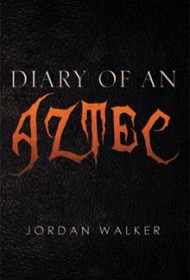 The contributions to today’s world by the ancient Aztecs are many, ranging from medicine to architecture to the creation of the modern calendar. But those gifts often get overshadowed in the history books by the shuddering brutality of a people better remembered for mass murder and human sacrifice.

An intimate and very human portrait of the hopes and fears of one family living many centuries ago has been brought to life in Diary of an Aztec. While fictional, the book is written as the diary of a teenage girl near the end of the fall of the Aztec Empire.

What makes this book especially noteworthy is that the first-time author, Jordan Walker, is herself a teenage girl. The 16-year-old not only provides exceptional command of the subject (she dedicates the book to high school honors world history class) but her crafting of the tale displays sophistication well beyond her years. There is none of the stiffness of some historical fiction. Rather, Walker lets the confusion and emotions of a young girl – who, in truth, could dwell in any century – take the lead. The historical events are fascinating but feel more genuine because they remain merely a backdrop.

Walker sets up her premise with a notation that the diary of Anateka was discovered centuries later by archeologists. The diary chronicles both the love and tensions of family life in an uncertain time. She writes of the grief that hardens her parents after her three-year-old brother is whisked away by soldiers to be offered as a human sacrifice and the confusion she feels as her other brother seems to pull away when he becomes a warrior.

The small quibble with the book is that readers will want more story, less facts. Walker works hard for authenticity, even inserting Aztec language and providing substantial research material after the story closes. Ultimately it’s unnecessary. Her unique story shines as is.