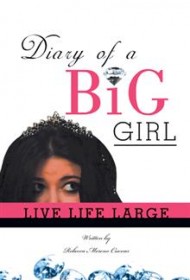 In this contemporary first-person novel about a California Latina, the author explores the pain of being different. When she was born, Madison was two-feet long and weighed in at 12 pounds. Her parents dressed her in toddler-sized clothes to bring her home from the hospital. In elementary school, she was mercilessly bullied because of her size, and the effects of those experiences stayed with her until her freshman year of college, when she connected with a competent therapist.

Madison tells herself she’s a beautiful princess because no else has ever said that to her. She’s part of a stable family, though her parents are undemonstrative. Using poems, short stories, reflections of therapy sessions, and her own candid telling of her story, she reveals how she overcame the insecurities that led her to self-destructive behavior. Her character confesses her attempts at cutting and her ongoing experience with bulimia, purging, and depression. She shares her fear of being alone, her fear of the dark. And then there is the boy, the special one she identified early in life as her prince. His name is Liam, and ostensibly he doesn’t know he occupies Madison’s every thought. With Liam, Madison learns about loss.

Madison, however, is also confident, determined, refreshingly honest, and rooted deeply in her Roman Catholic beliefs. The reader, therefore, experiences the highs and lows of a teen trying to find balance in a world that likes small better than large. Despite her insecurities, Madison knows she wants to be a wife and mother. She wants a college education. During high school, she resolves never to reject an opportunity, and it’s this kind of self-generated wisdom and grit that makes this girl truly special.

Madison is entirely likable and worthy of admiration. The book is well written; the voice authentic. Parents of teenage girls will find insight here, and troubled teens, big or not, will find a competent peer counselor.