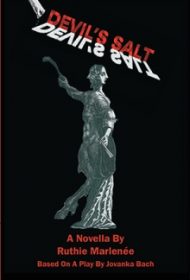 Devil’s Salt is a novella based on a play by California playwright Jovanka Bach and concerning accusations of witchcraft in the 1700s.

Governor of the King James Colony in Plymouth Bay, New England, in the 1700s, Hooker Wainwright is obsessed with kind and confident midwife Hannah Mulwray. He spies on her making love to her husband, and, driven nearly mad with unrequited lust, accuses her of being a witch, one who seduces others with her “devil’s tongue and feminine wiles,” as Wainwright tells the other colony elders.

When Hannah is discovered clandestinely arranging a Christian burial for a deformed, stillborn child (a “monster child,” Wainwright says), she is taken into custody, and the elders debate whether she should be banished or hung.

Author Ruthie Marlenée strives to maintain the rhythm and vocabulary of 1700s speech and prose in the narrative, embellishing it with striking images such as Hannah’s auburn hair glowing “like embers as she enters the forest glade.” Some readers may find the unrelenting sense of foreboding—the atmosphere of dread—a bit too oppressive, but the pacing of scenes and action feels right, even though much happens in the relatively few pages.

The story ultimately addresses issues that are relevant today, such as religious zealotry and the oppression of patriarchy. Near the novella’s end, male characters are no longer as concerned with association with the devil as they are with Hannah’s popularity and power, which they consider a threat to their own. As one woman says “The world’s the way of men. They control it. We pay for it.”

An overall intriguing read, Devil’s Salt may appeal to fans of Arthur Miller’s The Crucible as well as anyone who appreciates historical fiction with modern parallels.