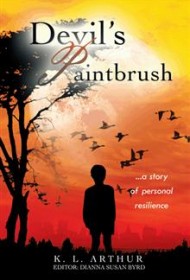 It’s impossible not to sympathize with the author of this novel, which appears to be a faintly disguised memoir in which the fictional protagonist, Ken Callahan, strives to overcome unspeakable childhood abuse, battlefield trauma and crushing insecurity. Ranging from the poor housing projects of Brooklyn, Maryland (a Baltimore suburb) to the bloody jungles of Vietnam and meetings of VA support groups, this could be a heartbreaking tale lightened by hard-won redemption.

But as a piece of writing it has major problems. Massachusetts’ K.L. Arthur, whose bio mirrors Callahan’s, often repeats himself; ensnares readers in confused flashbacks and distracting asides; inserts lists, heavy doses of psychobabble (“. . . manage his emotions, beliefs and behaviors in ways that enhanced his day-to-day functioning”) and melodramatic overstatement (“all his feelings and rational thoughts just seemed to collide at once, exploding with a magnitude that shamed Hiroshima”) that drag his story down.

The author notes that writing can be good medicine. But here, an overdose of such therapy-writing kills the power of his rather fragile tale of family dysfunction (absent father, insane mother, rivalrous brother, a jolt of incest) and adult disorder (PTSD, drug addiction, depression, despair).

Still, there’s no mistaking Arthur’s essential optimism and heart. The heroes of his story are a Massachusetts social worker named Kyle Armstrong, who leads Callahan back to psychic balance, his beloved wife “Angel Dawn” and Callahan himself, who on page 315 assesses himself this way: “. . . just as the devil’s paintbrush could grow anywhere, anytime, he too was literally unstoppable when it came to achieving his goals. But the most salient characteristics he shared with a devil’s paintbrush were his tenacity, resilience, resourcefulness, and adaptability.”

Readers will appreciate his ability to withstand some of life’s most difficult challenges, even if this story fails to live up to the material’s potential.