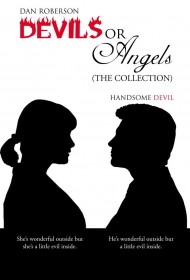 Devils or Angels by Dan Roberson is a tidy book of 11 poems and two stories. One of its main messages is that the personal struggle with temptation may be powerful, but self-worth can be gained only by making the hard choices. Roberson seems to see the human experience as one of continual tension between right and wrong.

These conflicting forces are often presented as external and real, as in the long poem “The Preacher and the Music Director’s Wife,” which describes the torment of temptation in spatial terms: “He needed to find somewhere to pray – / Someplace where sunlight poured over him, where evil couldn’t stay. / Evil would stay away from exposure and find all the secret places.”

Roberson has some skill as a poet and can structure a poem around an effective extended metaphor. In his poem “We Built a House,” he employs fresh imagery to evoke a relationship in conflict: “In the walls, silences became trapped for insulation, / Keeping uncomfortable spaces between us” and “We chose barbed shingles in an overlapping pattern, / Beautiful to behold, but they caught and tore the heart.”

The liveliest and most intriguing piece in the collection is the last, a story titled “The Coin.” It begins by grabbing our interest with suspense and drama created by the play of opposites: working class vs. wealthy, female vs. male. The story continues in a Gothic fashion, including a dungeon, magic, possession, revenge, crime and a bold conclusion.

Devils or Angels is written in easily understandable verse and prose, with a strong theme that unites the pieces. Because the writing is animated by the tension created when individuals face dramatic personal decisions, this book might appeal to readers who enjoy genres such as mystery and romance.