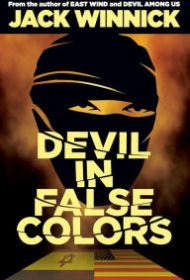 In the third installment of Jack Winnick’s military-nuanced thriller series (after 2013’s Devil Among Us) featuring former FBI agent Lara Edmond and Mossad operative Uri Levin, the duo investigates a horrific terrorist attack that killed five children at a Jewish preschool in Beverly Hills. They realize quickly, however, that the violence is only the opening move in a grand-scale conspiracy that could irrevocably change the balance of power in the world.

When an outspoken Los Angeles rabbi is found murdered in a dumpster, Edmond—in New York with the Joint Terrorism Task Force—is sent to California to assist in the investigation. After she realizes that Levin, a former love interest that she hasn’t seen in years, has also been brought in, the situation becomes even more complicated as the two are forced to come to grips with their intense feelings for one another while also going deep undercover to apprehend the masterminds behind the killings.  Edmond, posing as a woman new to the Islamic faith looking for companionship, connects with Muslim clerics posting on an online dating site, while Levin, pretending to be an escaped terrorist, attempts to infiltrate a terrorist cell in LA.

There’s much to like here. The author excels at creating authentic and believable political scenarios; the storyline is impressively knotty; the action is nonstop, and the pacing is relentless. But there are numerous weaknesses as well. The overall description (character, setting, etc.) is superficial at best; character development is minimal—the majority of characters are two-dimensional; and Edmond and Levin’s relationship, which should be a strong and dynamic thread throughout the story, is flat and forced. Intimate sequences between the two are decidedly clunky. “He opened her robe and was thrilled to the renewed sight of her glorious shape. She, meanwhile, added to his ardor…”

But ultimately the nonstop action and pedal-to-the-metal pacing outweigh the story’s shortcomings, resulting in a flawed but highly entertaining read.