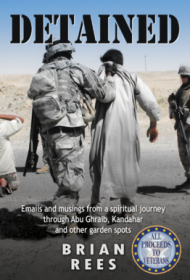 Brian Rees, a colonel in the U. S. Army Medical Corps, was deployed to Iraq and Afghanistan five times between 2005 and 2012 and lived and worked alongside the troops as a medic. From this unique position, he describes life’s challenges for the occupying forces, from everyday trials such as weather and food, to the grim business of injuries and death.

Rees shared his observations in a torrent of emails to family and friends back home. That raw material — updated since with additional comments and information — comprises roughly half of this book and makes powerful reading. In one email he writes: “[A sniper] … shot one of our marines yesterday, in the neck, he died in our OR. young guy, 23, wife, three kids, one a newborn baby he’ll never see. it’s just heartbreaking.” (Punctuation etc. as in the original email.) Elsewhere, the irreverent Rees loads up on black humor, sending emails that could double as hilarious scripts for M*A*S*H. The book is enhanced by photos and videos at www.detainedthebook.com.

Almost halfway through, Rees, a teacher of Transcendental Meditation (TM) and a strong advocate for the healthful mind/body technique, suddenly shifts focus. Here he encourages the practice of TM to help reduce hostilities that lead to war; he also believes TM can benefit veterans suffering post-traumatic stress and is donating the book’s profits to support that cause.

Rees discusses ISIS, Abu Ghraib prison, wartime medical ethics and more, and writes at length about Christianity, Islam, Sharia law, and ancient Indian spiritual and medicinal traditions. He includes barely relevant reports from trips to Vanuatu, Israel and Korea, and weighs in on such general issues as taxation, government debt, climate change, and genetically engineered food. As such, the book is overloaded with disparate material that can be overwhelming.

Readers will need concentration and stamina to reach the end of this densely detailed, but thought-provoking and painstakingly researched material. Those who persevere, however, will find the journey worthwhile.