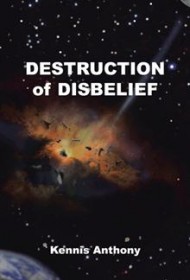 A sequel to Fate: A New Beginning, this science fiction morality tale examines the power of religious belief. The author, a licensed elder and deacon in the Apostolic church, includes references to prayer, speaking in tongues, and Bible passages, creating an unusual blend of science and religion.

Set in space and on Earth (specifically Washington, D.C., and Detroit), the story involves family, friends, and workers affected by the apparent destruction of a space cruiser containing high school students. These teens have descriptive (rather than realistic) names identifying their function within the story, e.g., Canta Cee is a character who can’t see and Albie Thayer is her helper who is always there for her. Other student names include Fashun Maddle, Ion Stein, and Phair Ghirl.

Reformed gang members have been blamed unfairly for the incident. Meanwhile, the mastermind behind the explosion, a resentful bureaucrat seeking to avenge his brother’s death, works to cover his tracks, until the truth eventually becomes known to all.

A subplot involves a thwarted romance between science-based Dr. Erica Myers and faith-based Eric Miller (a deacon with the Apostolic church). After time apart, much soul-searching, and a visit from an ancient biblical character, Erica finally allows herself to embrace Eric’s religious faith as her own.

Unfortunately, problems with style plague this short novel. Inconsistent references (Elizabeth Devereaux, Elizabeth, Ms. Devereaux, Devereaux), repetition of words and names, tense shifts, spelling errors, incorrect word choices (i.e. “perspective” instead of “respective”), and awkward sentence construction (“they wonder within themselves” are among the many mistakes. Several elements, including a self-indulgent breaking of the fourth wall (“He opens up a book his wife gave him by some new author – Kennis Anthony. She said it is awesome and a must-read.”), also mar this novel.

As a result of these missteps, readership will likely be limited to those open to this specific religious belief who are willing to overlook the narrative’s numerous stylistic problems.