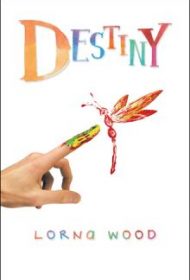 A compendium of legends about dragons couched in the tale of a young girl who wants to fly, Destiny is an ambitious undertaking intended for middle-grade readers.

Destiny opens with the title character watching the clouds on a summer day. As the clouds dissipate, she notices a dragonfly that lands on her. Destiny becomes very tired. When she wakes, she’s shrunk to the size of an insect herself—and the dragonfly has transformed into an equally small, winged boy named Danny.

Danny and Destiny decide to find a magical dragon who can also give Destiny wings. On this journey, they come across many animals hailing from different countries, and each creature tells them a story about dragons. After a long day, Destiny falls asleep. When she wakes, she realizes her adventures were a dream. But there’s a fun twist to this conclusion.

Destiny’s existence is a vehicle for introducing characters who can share tales of dragons. The myths come from many different countries, including China, Ireland, and Mexico. Each character is introduced in a similar way, ostensibly teaching readers greetings and a few phrases in new languages (for instance, an owl speaks Ojibwa and then shares a story in English about the thunderbird). The included transliterations are thoughtful but not entirely helpful, since the text (except for the Russian) is already anglicized rather than presented in native script, resulting in moments like this one in Arabic: “Sabah el kheer (Sahbah ehl kheer).”

The included myths are interesting, although their presence slows the overarching plot. Destiny’s desire to get her own wings feels secondary, and her emotions and character development are muted. Because of this, her failure to achieve her goal is not terribly tragic.

Despite slow pacing and the fact that the main character doesn’t drive the book, this novel presents an unusually diverse approach to folklore. As such, Destiny should appeal to readers interested in mythology rather than character-driven narratives.