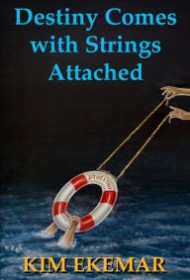 Kim Ekemar’s collection of 12 distinctive short stories explores the consequences of human actions and decisions and how they determine life’s progression of events.

Ekemar is a prodigious wordsmith, and the collection’s descriptive narratives, fully developed characters and scenes, poetry, lively dialogue and wit exhibit his flair for expression and engaging prose while remaining true to the collection’s thematic thrust. The stories flit convincingly through time from the 1700s to the present day and across the globe from Norway to France, Papua New Guinea, Corsica, Ireland, the Caribbean and England.

The anthology’s first story, “Homage to a Man of Letters,” honors the literary legacy of the indomitable yet fictional English scholar and “wizard of words” Zachariah Abercrombie. In 26 essays commemorating Abercrombie’s adoration of letters, the equally fictional contributors venerate his influence on their careers, personal lives and intellectualism. The homage is a stellar example of Ekemar’s own word wizardry.

In “The Secrets of the Secretaire,” an antiques dealer discovers the provenance of the writing desk of one of France’s most famous novelists and unearths  lascivious letters of an opportunistic Parisian courtesan composed just before the French Revolution. “The Curse,” a revenge tale set in Corsica in 1769, demonstrates how an act of damnation against one family ultimately shapes world history. In the majestically rendered “The Realm of the Black Eagle,” an anthropomorphized eagle cleverly routs the humans intruding upon his territory.

Some typos, missing punctuation and name misspellings do little harm. Ekemar’s stories provide glimpses into the lives of characters who fall because of greed, who survive skirmishes because of a lust for life, who succumb to failure and dispiritedness because of loss, who profit at the expense of loved ones because of self-interest and who forfeit the joys of love because of everyday mundanities. Eclectic and entertaining, this solid collection satisfies from beginning to end.