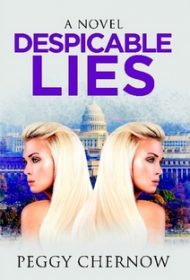 Peggy Chernow’s Despicable Lies turns on the separation of twin sisters who were once close but haven’t spoken in 15 years.

After Danielle and Darcy’s parents’ divorce and both mother and father remarry, the identical twins are sent to an old-fashioned boarding school, where the two frequently switch identities for exams and assignments. Then one day, the strict Baptist headmistress announces that their father is out of money and one of them must leave school. Darcy is sent home, but she has no idea how the decision was made and has no chance to fight it.

As the story continues, their father tells Darcy that Danielle never wants to speak to her again. Darcy has no idea what she has done, and her father won’t tell her.

Fifteen years pass without the twins speaking. Both young women are pursing successful careers, Danielle as a dermatologist in Boston, Darcy as a real estate agent in Washington D.C. The sisters don’t talk often about each other to friends, but a series of coincidences soon exposes their relationship. As the narrative evolves, their friends aim to reconnect the twins and Darcy eventually learns the truth about her mysterious dismissal from school.

The question of why once-close twins suddenly become estranged is a good hook to pull readers along. But while the chain of events seems plausible enough, the outcome doesn’t carry the emotional heft one would expect.

Likewise, the characters’ behaviors are inconsistent. A domineering, intimidating woman at one point becomes loving, then nearly violently abusive, then over-the-top remorseful. An absent parent is suddenly a loving and warm victim. The characters seem drawn to create drama, then later redeemed for plot resolution.

Meanwhile, information is often repeated about the girls’ history as the narrative shifts in time, and the plot and subplots are often too neatly resolved.

Given such flaws, the story requires revision before it can attract an appreciative audience.