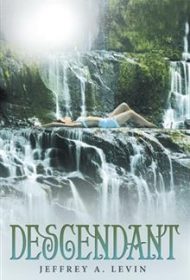 Jeffrey A. Levin’s science fiction novel Descendant is a Joycean-like attempt at a stream-of-consciousness tale.

Sixteen-year-old Michael Eisenstein is the eponymous descendant of a long line of men whose calling it has been to develop weapons of mass destruction for the American government. By the start of the book, there have been eight more world wars, and Michael’s father Benjamin is the most recent heir to the Eisenstein family tradition.

From there, the plot is at times incoherent. Broadly: Michael meets Maya, a neighbor, and immediately falls in love, loses her, and then eventually marries her; he encounters Ezekial, a time-traveler, whom he has apparently met in a previous incarnation; and with Ezekial, Michael is going to eschew his family lineage and save the world from destruction.

The story is told in first person, with Michael’s thoughts and actions unfolding as though being directly recorded and reported as they happen. As such, Michael provides many daily, mundane details unnecessary to the plot (such as noting the sayings on particular articles of clothing as he selects them). The narrative leans toward “tell,” rather than “show,” and convenient plot devices impact believability: for example, Michael suddenly has the ability to hear other people’s thoughts, including the president of the American Isles (formerly the U.S.) just when the skill is needed.

Most egregious, however, is the large amount of seemingly unimportant information woven throughout Michael’s narrative about various technological gizmos and scientific theories (e.g., hidden portals in Earth’s magnetic fields), explained with difficult terminology and confusing acronyms. The latter, in particular, bear little impact on the story; their only purpose seems to allow Michael to show off his vast knowledge.

Ultimately, this ambitious story collapses under the weight of a plot that’s difficult to follow and too much unnecessary detail. As such, sci-fi fans are likely to be disappointed by this time-traveling adventure story.