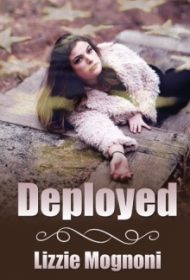 At age 20, seductive Katherine has the life experience of a much older person. She has struggled with the after-effects of a sexual assault during her teen years and is plagued by depression, relying on Matthew, her high school flame and current love, for support. However, Michael struggles with his own demons, and his penchant for gambling and violence threatens their relationship.

When handsome mechanic Trey stops to help Katherine with a flat tire, they share an immediate attraction that widens the small cracks in her precarious romance with Matthew. It’s an attraction Trey and Katherine are free to more fully explore when Matthew joins the Reserves and is deployed to Turkey to fight in a fictional, present day WWIII.

As the author explores the players in this difficult love triangle, she struggles with a tendency to “tell” about them rather than “show.” For example, a paragraph describing Katherine’s past ends with, “Katherine possessed a mysterious and broken soul,” an idea that was already illustrated throughout the paragraph. In addition, although the characters are ultimately engaging, they struggle to overcome the clichéd archetypes of hot mechanic, beautiful ingénue, and soldier suffering from PTSD, which stunts their character development.

Katherine and Trey’s connection feeds on passion and conflict, so they have an uphill battle ahead of them. As Matthew faces the horrors of war and Katherine endures her own upheavals, difficulties, and change, the plot spans years, sometimes moving too fast as it jumps from one scene to the next, occasionally without adequate explanation. (This does allow, however, for a multilayered story within a relatively short read.)

Revision would greatly enhance the narrative. Still, Deployed is a complex romance that could appeal to readers who aren’t afraid of a little darkness and are willing to explore the gray areas that exist around love, lust, friendship, and committed relationships.