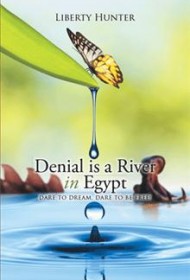 As most new parents know, exhaustion is a constant companion, but joy is usually not far behind. Yet there is little of the latter as author Liberty Hunter shares the experience of a young mother, Indy Fielding, dealing with her autistic daughter Cassie, two younger children and overwhelming feelings of self-doubt.

Although the novel is couched as Indy’s story, it seems as if this is about Hunter, who is also raising an autistic child, according to her author bio. Hunter makes little effort to separate her own experiences from those of Indy’s, weighing down Indy’s experiences with tedious medical explanations and incorporating numerous grainy photos, charts and lists into her storyline. The latter only serve as distractions and do little to enlighten or engage.

While the steps Indy takes to becoming an advocate for Cassie are interesting, Hunter loses that focus far too often. The author frequently includes extraneous information — discussing a mouse infestation at Indy’s in-laws’ home, for example, or her son’s ability to charm everyone he meets, among many other life episodes – while keeping autism in the background.

Additionally, some of the events of the book are puzzling. For example, initially Indy is surprised to learn that Cassie has issues at school. It’s true that most new parents don’t know what’s normal with young children, but several red flags surface well before Indy receives the call from school suggesting a problem.

Perhaps if this lengthy account had been written in first person, rather than third, a bond with readers would have evolved, but Indy’s experiences finding resources for her daughter and facing her own shortcomings are lost among the many tangents.

Autism is often misunderstood, and it may be difficult to diagnose. It’s unfortunate that Hunter missed the opportunity to share a personal history. While her novel may offer some useful information to parents in similar situations, its lack of narrative drive limits its ability to engage fiction readers.