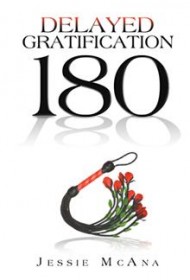 So it is with Jessie McAna’s Delayed Gratification 180, which is essentially a gay take on Grey with a few twists. At its center are: Alec, a Grand Master of domination; Clayton, once his submissive, now a Master himself; and Daniel, the hunky man who starts out as Clayton’s sub, but soon finds himself exchanging roles with his subjugator. These aren’t everyday Joes. Daniel is a successful director; Clayton runs a thriving record company, and Alec is wealthier than the others combined. McAna makes it clear that money is an illusion. Control and power are the real drugs.

The story includes the arrival of an abused sister, a homicidal boyfriend, an office romance and the introduction of the Angels of Justice, a shadowy group of BD/SM adherents who, as their name implies, dispense real-world justice. The book’s ending is pure Mannix on steroids.

The writing is competent enough, and there’s plenty of sex and insider knowledge of this specialized fetish. What’s missing is a reason for us to like characters who don’t seem to like themselves. They’re kinky, self-indulgent and beset by people with axes to grind.

As for the book’s mildly cryptic title – delayed gratification being a sublime form of self-punishment – one wishes the plot lived up to it. Readers bob along on a frantic current that deposits us on a beach strewn with broken bottles. We know how we got there. We just don’t understand why.