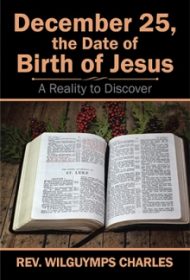 Did the birth of Jesus really take place on December 25th or was this date adopted from “pagan festivals that celebrated the return of the sun after the winter solstice”? That’s the question at the heart of Reverend Wilguymps Charles’ earnest exploration for the truth behind tradition.

Mixing theological detective work with ample knowledge of ancient Jewish and Greek history, the reverend uncovers clues found primarily in the Gospel of Luke that throw light on the answer. Examining the difference between religious and civil calendars in first century Palestine as well as linking information about the births of John the Baptist and Jesus, the author makes a compelling case for the accuracy of the date in question.

Calling out critics who insist, for instance, that shepherds wouldn’t have been out in the fields during the month of December, the author turns to French religious scholars who have examined ancient weather patterns as a retort. Moreover, Charles highlights recent archeological evidence, including information about Quirinius, governor of Syria in ancient times, that suggests the Bible accounts are more precise than many scholars previously thought.

Charles deeply admires the Bible, and his dedication to its authority as the “Word of God” is apparent throughout. His arguments are sturdy, and he methodically leads readers through his exploration step-by step.

However, though well-argued and well-researched, the book requires heavy editing. Numerous run-on sentences, grammatical mistakes, and awkward phrasing often undermine the author’s arguments (e.g.: “First of all, as to “Saturnalia”, which were during Roman antiquity a festival that took place a week before the winter solstice, which celebrates the god Saturn and were accompanied by great popular rejoicing.”) Such issues make reading exceptionally challenging.

Overall, Charles’ devotion comes through strongly in these page, but the book needs a thorough rewrite before it can appeal to a general audience.