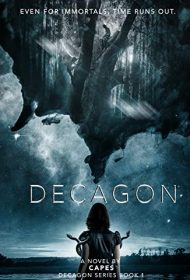 With Decagon, author Capes (a pseudonym for TL Adamms) creates an intriguing fantasy.

Technically a second edition, with a different cover and editorial changes, Decagon is the first in a series. Here, Capes imagines a world in which two groups of immortals, the “Aion” and the “Others” are in conflict.

The Aion are direct descendants of the Reaper and the “Reaper’s Lover,” who bestowed immortality upon them. The Others’ origin is unclear, yet appears to have been caused by a fever. Neither group is literally immortal, but killing them, especially the Aion, is incredibly difficult.

Aion stalk the Others, hunting the “Angel of Death” (an extremely powerful renegade Aion who is hiding in their midst) and seeking more information about the “Dreaming” state that the Others have learned to navigate successfully.

Spanning events from the 17th century to the present day, Decagon unfolds through the eyes of its protagonist, Dalia, who fled the Aion and gathered a group of Others to form a community. She never reveals that she herself is the Angel of Death, although readers learn this early in the story. The novel culminates in a battle between the Aion and the Others in which Dalia’s worlds collide and her identity is endangered.

Capes displays creative world-building expertise, using myth to give the work an entrancing, mystical appeal. In fact, at times, Capes’ writing is poetic. For example, Dalia says, “It’s as though I’m a planet made of ice being chipped, then melted, then washed away.” The author imaginatively presents the concept of the “Dreaming” state, which entails creating new worlds in a “nonphysical reality.”

The book needs some structural work, however. The novel’s Part II consists of only the book’s last 20 pages, leaving it feeling unnaturally truncated. Tweaking the structure would help to expand the story’s potential audience.

Nevertheless, Decagon is a compelling story—one that offers substantial appeal to genre fans.