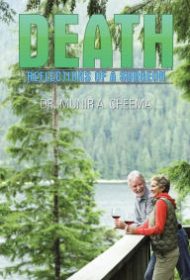 With this book, Dr. Munir A. Cheema, a surgeon from Pakistan, delivers a collection of essays linked by the central theme of death.

The author opens his book with profiles of friends who have passed. With each, he tries to distill the elements that gave meaning to that person’s life and made it exemplary. Thus, he tells of his friend, Major Badar, who refused to be released from a prison of war camp until all the other prisoners were also released. He praises other friends for their joie de vivre, kindness, and equanimity in the face of adversity.

Cheema moves from these examples of lives well-lived to ruminations about death based on his own experiences. Through anecdotes, he shows us why a physician shouldn’t take extraordinary measures to resuscitate patients suffering from fatal maladies, and why a doctor needs to be able to empathize with his patients and their families.

Expanding on his theme of how to live in the face of death, Cheema informs readers that Muslims believe that everything in “life is pre-ordained.” Consequently, he feels that it’s important to live a life of kindness; in this, he states, “all religions preach the same theme.”

Cheema writes in an empathic and thoughtful voice and has a knack for painting vivid scenes. As a memento mori seen through the lens of personal reflection, his book often succeeds in reaching a universal appeal, as in his story of Major Badar. Sometimes, however, the content fails to rise above a private, limited nature (for instance, he includes letters of condolences to friends). The narrative is also hampered by verb agreement and punctuation problems, and suffers from a confusing dearth of the definite article, as in: “Following day a student nurse drew my attention to…”

Revision with an eye to crafting less insular stories and correcting writing errors would enhance this offering. Nonetheless, readers will find plenty of compelling thoughts on mortality in these pages.