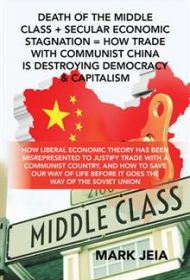 Despite the wordiness and length of the title, Death of the Middle Class is a concise, reasonable and clear exploration of one of today’s most pressing political and economic issues: international trade.

In a compact 115-pages, Jeia argues that trading with communist China imperils developed nations like the United States. The cost of the massive inefficiencies of China’s communist system—well demonstrated by the collapse of the Soviet Union from its own internal and systemic flaws—are fobbed off on developed nations through colossal trade imbalances that favors China. That imbalance, he argues, drains the wages of the middle class and poor in developed countries and, put bluntly, is killing capitalism.

His argument may not persuade one and all, but it is coherent and well presented, unblemished by jargon characteristic of tomes proclaiming a complex economic theory. He supports his case with a wealth of straightforward charts and graphics. The crisply written manuscript is sprinkled with clever insights, such as when the author, discussing assumptions about being on the “right side of history,” notes: “History does not determine who is right. History determines who is left.”

All that the book is lacking is a politically workable blueprint for how the United States, if it chooses to do so, can shut communist China out of the trading network of American, European and other developed nations.

For those whose memory of the Cold War is still fresh, the warning that a communist country is a threat to the freedom of all will sound familiar. For those who missed that trying time, it is well worth contemplating.