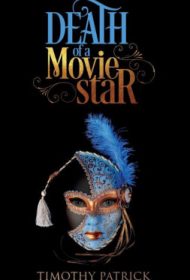 Timothy Patrick’s Death of a Movie Star offers a look at the underbelly of Hollywood, where careers teeter on high wires, crashing descents happen often, and the only recourse after a fall is to brush yourself off and try again.

The story revolves around two actors: 87-year-old Lenora Danmore, and the young A-lister Cassandra Moreaux, who blames Danmore for ruining her mother’s acting career by having her blacklisted during the McCarthy era. Moreaux is bent on exposing Danmore’s sordid past as revenge. Meanwhile, Danmore has plans of her own. As she says in the book’s opening lines: “Everyone gets a free murder. It’s like a savings bond given to a newborn baby. The only catch is that it takes eighty years to mature.”

The plot unfolds through their two points of view, as well as those of Micah Bailey, Danmore’s illegitimate son and emcee of the popular reality show StarBash, where actors compete for a movie deal; and Brandi Bonacore, an actor with a grievance against Moreaux. As Moreaux becomes involved in the tawdry reality show mainly to confront Danmore about her mother’s aborted career, twists and turns abound.

Patrick has a knack for description and setting. For example, an interactive museum, where visitors can become part of a Danmore movie through high-tech magic, comes alive with cinematic detail: “The sound of a squeaky-wheeled costume rack echoed through the theater followed by the sound of a rattletrap elevator.” Additionally, the story delivers taut pacing, interesting character development, and amusing lines: “The mere fact that her lips hadn’t been Botoxed into a couple of pouting bratwursts was a miracle in itself.”

The book is not without flaws: The narrative arc sometimes gets lost in the author’s use of so many points of view, and the ending feels somewhat contrived and predictable. Still, it’s a breezy read with interesting insights throughout. Those who appreciate movie-land and reality television are bound to enjoy Death of a Movie Star.