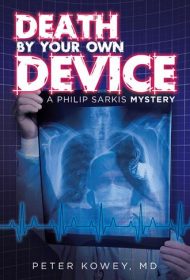 Dr. Peter Kowey is a cardiovascular surgeon in Pennsylvania — just like Philip Sarkis, the protagonist in his four previous mystery novels and his newest, Death by Your Own Device.

Here, the plot concerns Sarkis’s former student, Ray Gilbert, who notices a spike in questionable uses of medical devices such as pacemakers and defibrillators in patients in northern Pennsylvania, where he practices. Many come from a new company competing with established manufacturers.

Gilbert contacts Sarkis, his old mentor, who helps him present a lecture to local doctors about alternatives to surgical implants, but the spike continues. Gilbert eventually hooks up – in both senses of the term – with a young newspaper reporter of questionable ethics. They produce an investigative series about his suspicions but later are found dead in a motel room.

Readers might think this is where Sarkis steps in and solves the mystery, but Sarkis is a side character, hardly involved in the story. His wife is a lawyer and his father-in-law runs a detective agency that investigates the murders after police close the case without a conclusion. The plot thickens when Sarkis’s wife, who used to work for the agency, finds a connection the cops missed.

Kowey is a solid writer who engages readers with believable dialogue, and the narrative reflects his medical knowledge. However, there’ so much medical terminology, sometimes without explanations for lay people, that it bogs down the story. Other detractions include passages that don’t move the narrative forward, unnecessary details (“He sped down the hall to the visitors’ waiting room, his Keds sneakers giving him a little added traction as he zoomed around corners”), and rants against institutions such as the profit-driven medical industry, greedy hospitals and doctors, and sloppy media outlets that chase scandalous stories to boost readership.

These flaws greatly impact the story’s readability. The book ends in plot twists involving Sarkis and the murders, but for many, these surprises might be too little, too late.