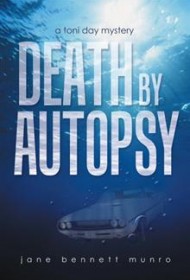 Jane Bennett Munro is a veteran mystery writer, with three earlier novels already on the shelf. Death by Autopsy brings back her regular cast of characters, all revolving around Toni Day, a hospital pathologist in Twin Falls, Idaho…just like Munro in real life.

Munro has been a hospital pathologist in Idaho for 37 years. Her protagonist Day is an amateur sleuth who seems to attract death and crime (and not just because she cuts up dead bodies for a living).

Death by Autopsy begins with a car crash into an icy canal, which Day witnesses. She promptly dives in to try and help. The body that’s pulled out turns out to be a little-liked nurse at the hospital, who’s known for her nastiness and gossiping.

As Day prepares to perform an autopsy, she draws blood from the victim’s heart, then discovers the woman isn’t actually dead. She dies two days later, causing Day concern that drawing the blood may have led to her death (“death by autopsy”). That worry becomes concrete when the woman’s relatives sue Day, her partner and the hospital.

But Day finds the victim and her husband (who was stuffed in the trunk of the car when it drove into the canal) were murdered, and the intrepid pathologist, who has a knack for asking questions, soon becomes a target herself.

Munro has created a pantheon of likable and believable characters, and her experience as a pathologist informs her writing. She doesn’t spend much time describing the Idaho landscape or scenes, but just enough to paint a picture of each setting. The story reveals itself primarily through rapid-fire exchanges of dialogue between the characters, who think out loud and fill in the plotline.

Munro’s prose is clean, spare and without much artful flair. Still it’s engaging and pulls in readers effortlessly. If this is your first Toni Day novel, you’ll want to go back and start the series from the beginning.