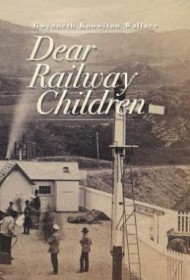 Collected letters can offer a window into place and time, as well as memorialize their author. Late in Gwynneth Knowlton Wallace’s life, she began writing about her early childhood in letters to her family. Growing up in western Canada as the daughter of a railway station agent meant that she lived life in a station house, which presented an odd mix of the primitive and privileged. “Dear Railway Children” is the tag Wallace begins each of her letters with, and her stories are unique and filled with detail.

These short pieces, nicely illustrated with drawings by Mark Oakley, describe a child’s wonder at life among giant trains —the family received travel privileges as part of the job, and traveled to both coasts over the years—as well as the hardships of prairie life. Messages received by telegraph, pumping water to drink and bathe, and outdoor privies were commonplace, and a dry season could be financially devastating for the Danish farmers who settled this small town.

“Yes, prairie folks knew weather,” Wallace writes in a chapter about a Dust Bowl-like drought that lasted nine years before the seasons came back into sync. “…Dust filtered under the door and made little drifts on the sunporch floor,” she continues. “Tables were set with dishes upside down until meals were served, and food was covered to protect it from the dust until people sat down to a meal.”

The conversational writing makes this short book fly by, and it’s easy to feel close to young Gwynneth as she recounts her experiences in a rapidly changing world. The last page of Dear Railway Children features her funeral notice from July of 2013, and it comes as a blow. We can be thankful her family saved these letters, which offer a unique take on history and serve as a loving tribute to their creator.
Also available in hardcover and ebook.