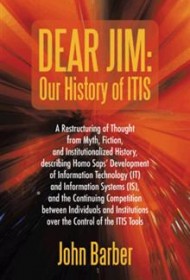 In Dear Jim: Our History of ITIS, author John Barber attempts to create a new paradigm for creation myths and for the history of communications. Focusing primarily on Egyptian mythology, he describes the gods in the language a computer programmer would choose. Hence the Egyptian primal god, Atum, designs “stable Thoughtbases [sic].” and installs them in chaos. Atum then clones the other gods to help him maintain “the equilibrium conditions of each Thoughtbase [sic].”

Elaborating on the computer and information technology motif, Barber appears to depict humans as imperfect and rather fragile data processors. His text, however, is extremely difficult to decipher in most cases, and his precise meaning is hard to determine. For example, he writes: “As their thought-processing driver, the Homo Sap [sic] thought-processing imperative operated at speeds much faster than the maximum speed at which their hominid animal operating systems activated and coordinated the HAP [sic] technologies that they had to use to capture thought structures in WritingITIS [sic] products.”

By translating the old myths and a history of human communications into computer jargon, Barber seems to be recommending a radical shift for the core of our cultural perceptions. Star Wars lightsabers and Star Trek communicators, he implies, are no longer adequate symbols for the new mythos. Our new era demands the abstract terminology of the silicon sector.

Unfortunately, this rendering of the blood and anguish of myth and history into technological terms, is as dry as a computer program. Throughout the book, Barber describes humankind’s attempts to derive a measure of freedom from their gods and masters. This should be the stuff of nail-biting drama. Instead, the reader gets lost in the high-tech monotone. While it is doubtful that most readers will have the patience to read Dear Jim to the final pages, the book may, nevertheless, find a niche with computer programmers.